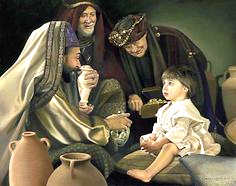 Neil Diamond has a wonderful song about Signs – “some who never read them, some who never heed them” and it was actually a sign in the sky that those Persian astrologers were following (most probably the planet Jupiter) when they turned up in Jerusalem on 25th December, to find Jesus was a toddler, not a new-born babe. On that day Jupiter reached the end of its retrograde motion and stood precisely over the town of Bethlehem when viewed from Jerusalem. These are the facts which you can check for yourself by using the sky simulations in the package Starry-Night, Space.com.

One of our own ‘wise men’, Dr Jeff Tallon, discovered this back in 2002, when he put his not inconsiderable talents to work, researching the Jewish history and astronomy of the biblical accounts of Jesus birth. These are the scientific facts, whereas Christmas traditions expressed in popular carols and the graphics of many beautiful Christmas cards have three Oriental camel-borne kings, arriving at a stable in Bethlehem at the same time as the shepherds, to find the Christ-child lying in a feed box. Lovely traditions but now seen to be ‘alternative facts’. Jeff also discovered “in that year the Jewish feast of Hannukah [commemorates the dedication of the rebuilt temple in 163BC] fell also on 25th December. The date of Christmas, then, has nothing to do with a pagan feast but seems to refer to the day that the Magi visited Jesus.” So, linking Christmas gift-giving with some pagan religious festival is just another ‘alternative fact’.

Knowing these things is unlikely to change received traditions but may give us much more confidence in what the bible says about this one who came as sign to all nations and not least to us who dwell at the very ends of the earth.

Yet stranger still is the fact that a stellar symbol well known to all Kiwis, once was visible in the Northern hemisphere, and on the same day the wise men arrived in Jerusalem stood vertically over Bethlehem. To the wise men the Southern Cross meant nothing, and only after the passage of two full millennia would Christians, having travelled to the ends of the earth, see the cross in the southern skies, and having developed the computer technology to recreate the night sky, realise that from the dawn of creation, the Southern Cross was destined to stand upright over the temporary dwelling of the Christ child. Who would have thought that his birth, death and resurrection could have been linked in such a powerful way, in a sign the cosmic significance of which is only visible to the eyes of faith in the twenty-first century?

So sometime before Christmas, when the sky is clear, and we look up at the Cross in our skies, may we remember that it once stood over Bethlehem. And may we trust the one born there so long ago is, in the words of Neil Diamond, the star to guide us as we sail the reefs and the coves within our souls.

“I will give you as a light to the nations so that my salvation may reach to the end of the earth.” Isaiah 49:6